We’re overdue to share this artist interview with you, but hope you’ll enjoy it all the same. AmourEtLuxure won the X-rated Fairy Tale contest last year and has added quite an impressive collection of 3DX artwork since. Check out their interview below for more insight into this artist!

Congratulations on winning the X-Rated Fairy Tale contest, AmourEtLuxure. Tell us a little about the inspiration behind your fairy tale.

I was pretty excited about this contest; I voted for it. I started reading a lot of Grimm and Hans Christian Andersen in preparation, but those can be pretty brutal. I knew i wanted to sex it up a bit. That's when Peter Pan came into mind. What's more Fairy Tale-ish than fairies? So I imagined Tinkerbell with a lot of pent up sexual frustration because Peter is so asexual, which is fine. So naturally, when they aren't on some adventure she needs to find some form of release. This is where the forest fairies come into play. They're into everything. 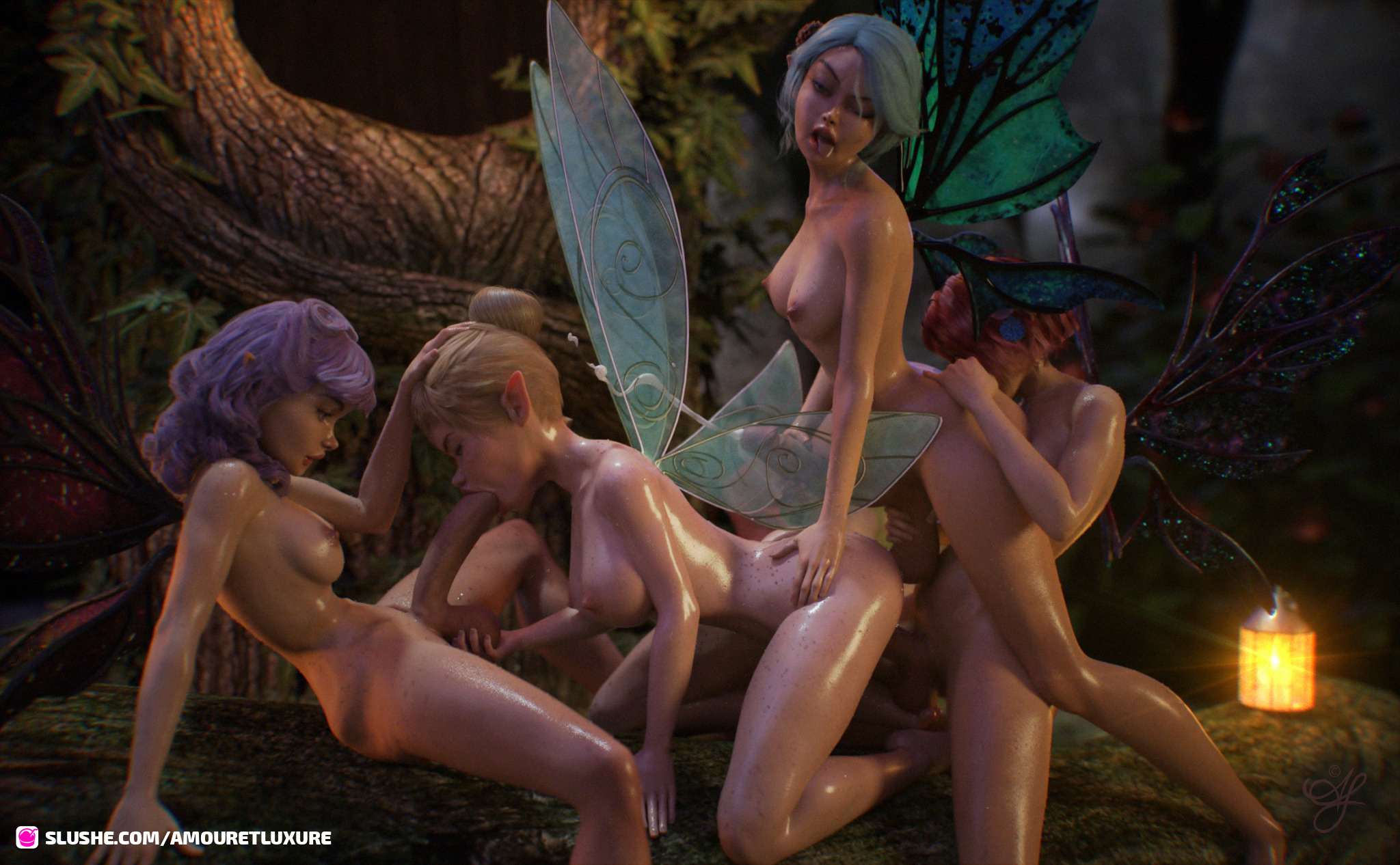 When you think of fairy tales, what comes to mind? Are there any themes you find especially interesting?

I'm a huge fantasy fan and fairy tales were the ancestors of modern fantasy. The first thing that comes to mind is all manner of creatures and humanoids that live different lives in hidden places. I always try to imagine fairy tales and fantasy in real situations. Did you ever see a bathroom in Rivendel? In Goblin Town, you wonder where all those goblins came from, they should be banging each other like rabbits. Themes of the unknown are the best. You can go anywhere with stories as long as there is a way to explain why the world exists in that way. It opens up so many directions.

How long have you been making 3DX art? How did you get started?

Not long, actually, since about last September? I came across some SFM artists a few years back who were very talented. It inspired me to finally put stories and images to the things that go on in this deranged head of mine. I've toyed around with Daz in the past for different projects, but I was apprehensive about posting things. So last year I was going to start a Tumblr blog when the site imploded for the 3dx community and I followed most of the artists here to Slushe. So I bit the bullet and started posting. 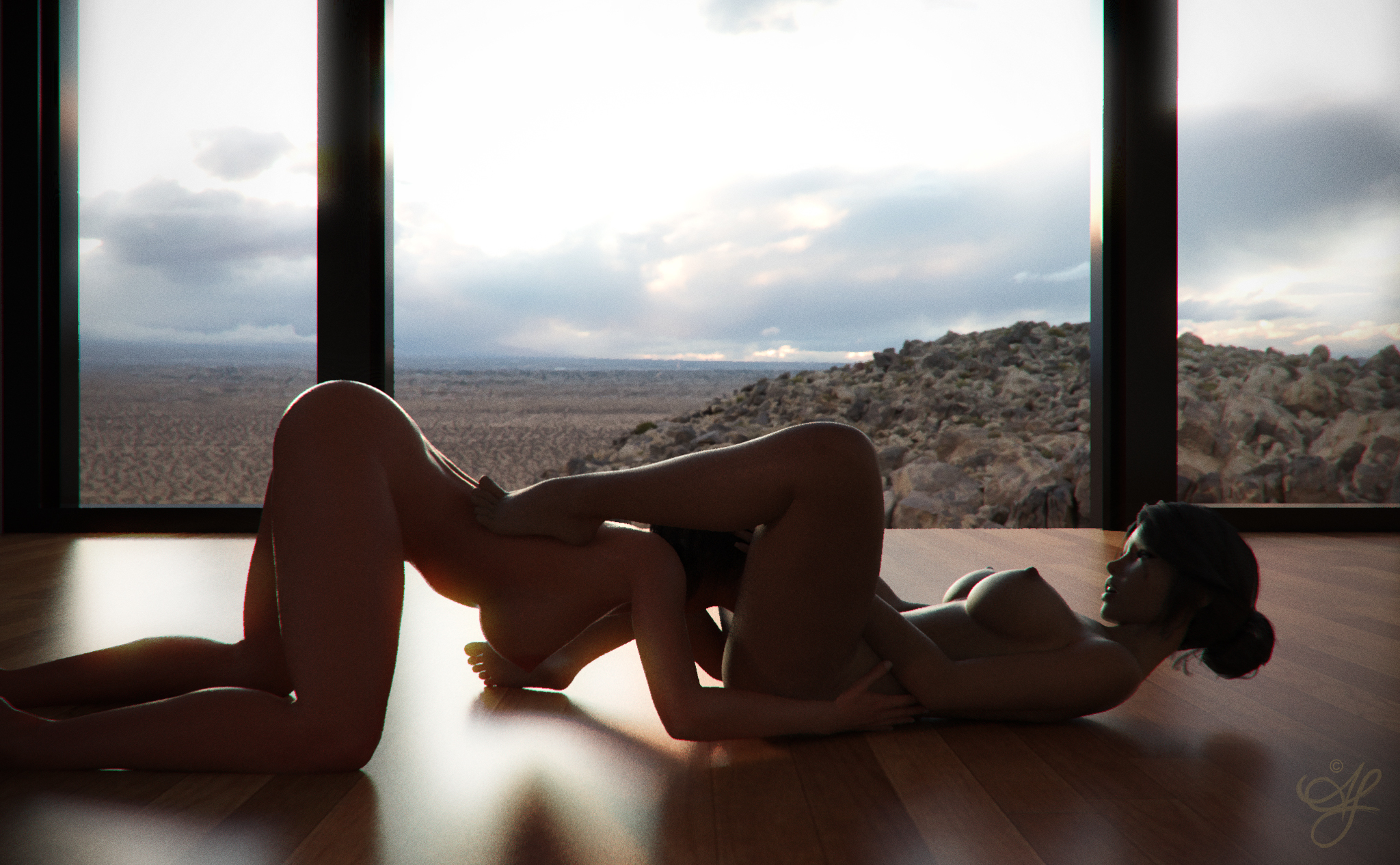 Describe your creative process. What tools do you use, and what do you draw inspiration from?

I start with characters and ideas for the environment and clothing that stem from Daz Studio. Anything that I don't have I'll make in Cinema 4D. I'm currently learning Zbrush and Substance Painter so I'll be adding those to the toolset as soon as I can. After a render in IRay, I take it into After Effects to color correct and add effects as necessary. I draw inspiration from books, other artists, music, photographers and comics. I can spend hours on DA just looking through other artists' work. It's important to post because you never know who's going to be inspired by your work. I don't post the same things to DA since they seem to be steering away from their namesake. I like to keep the 2 sites separate.

Do you listen to music or watch something in the background while you create? If so, what do you enjoy most?

Music for me shapes my mood. So I'll listen to whatever I need to for the particular image to really shine. Action shot? probably some heavy metal. Soothing relaxing shot? classical music, or soundtracks. Cyberpunk? Dubstep or similar. Demonic imagery? Black Metal for sure. Bandcamp is awesome to get lost in the music of any genre. 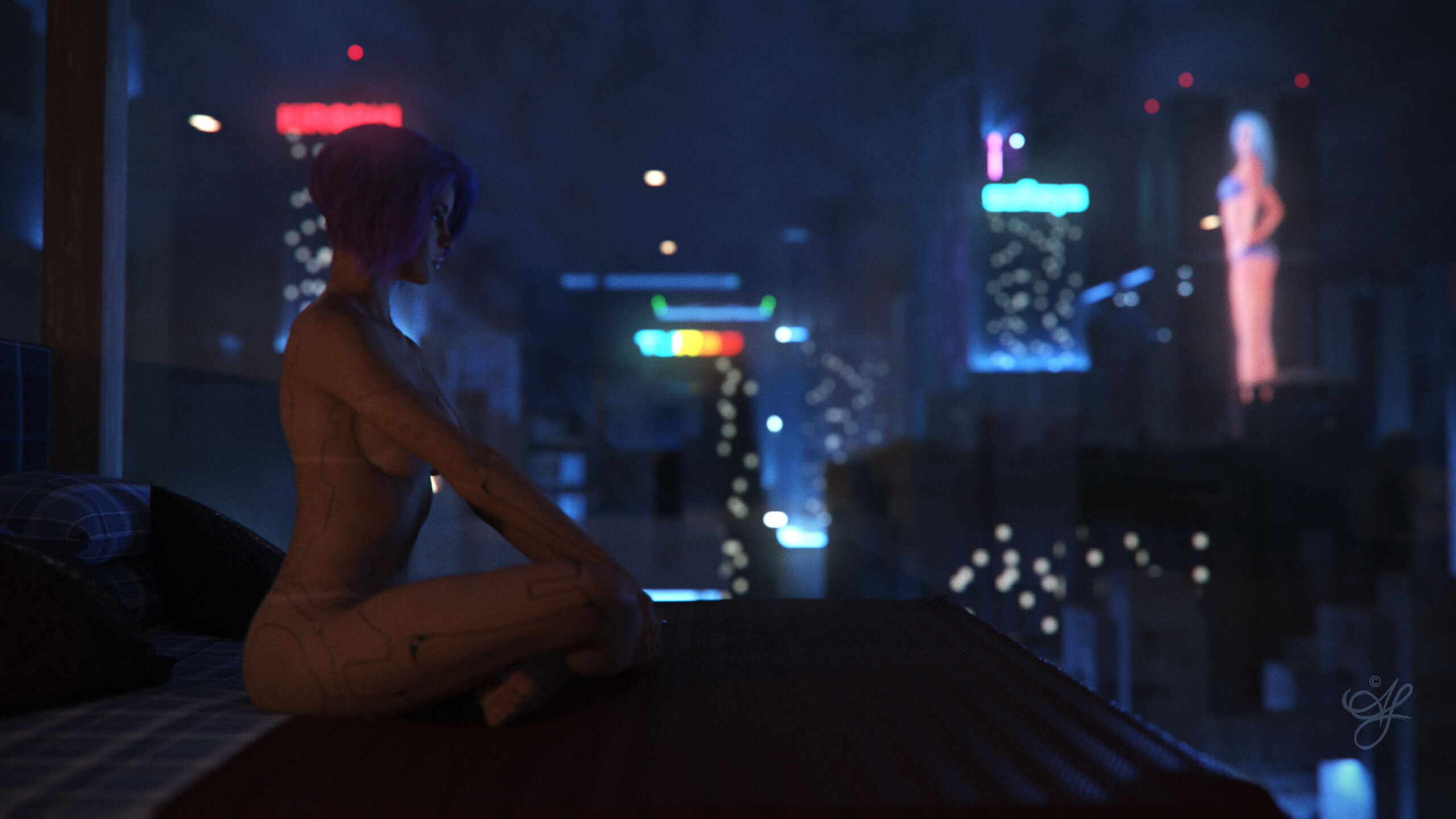 What is your favorite fantasy that you can only show through your art?

I'm pretty vanilla when it comes to fantasies. Multiple partners is the big win for me, but that's doable in the real world. But maybe Asari and gorgeous elves? Dark elf and High elf for sure.

I loved the occult symbolism of your Halloween entry. Tell me more about that.

I've recently been looking into The Satanic Temple, a non-theistic organization. They commissioned a statue of Baphomet which is a character that embraces plurality in its symbolism, animal and man/woman, above and below. I wanted to embrace that since it's an idea of inclusion of all. Plus a lot of artists already do that to some degree with futa characters. The idea of inclusion was important for me since I don't believe in kink-shaming anyone or of dividing people based on anything else. We're all different, but we all have a place here. So the idea was to take the original design of Baphomet as a female-chested, but male-genitaled figure with horns to represent the animal in the same pose, pointing up and down. The blue character is a character I created, Eris Nyx, who represents the Greek Goddess of the Night (Nyx). 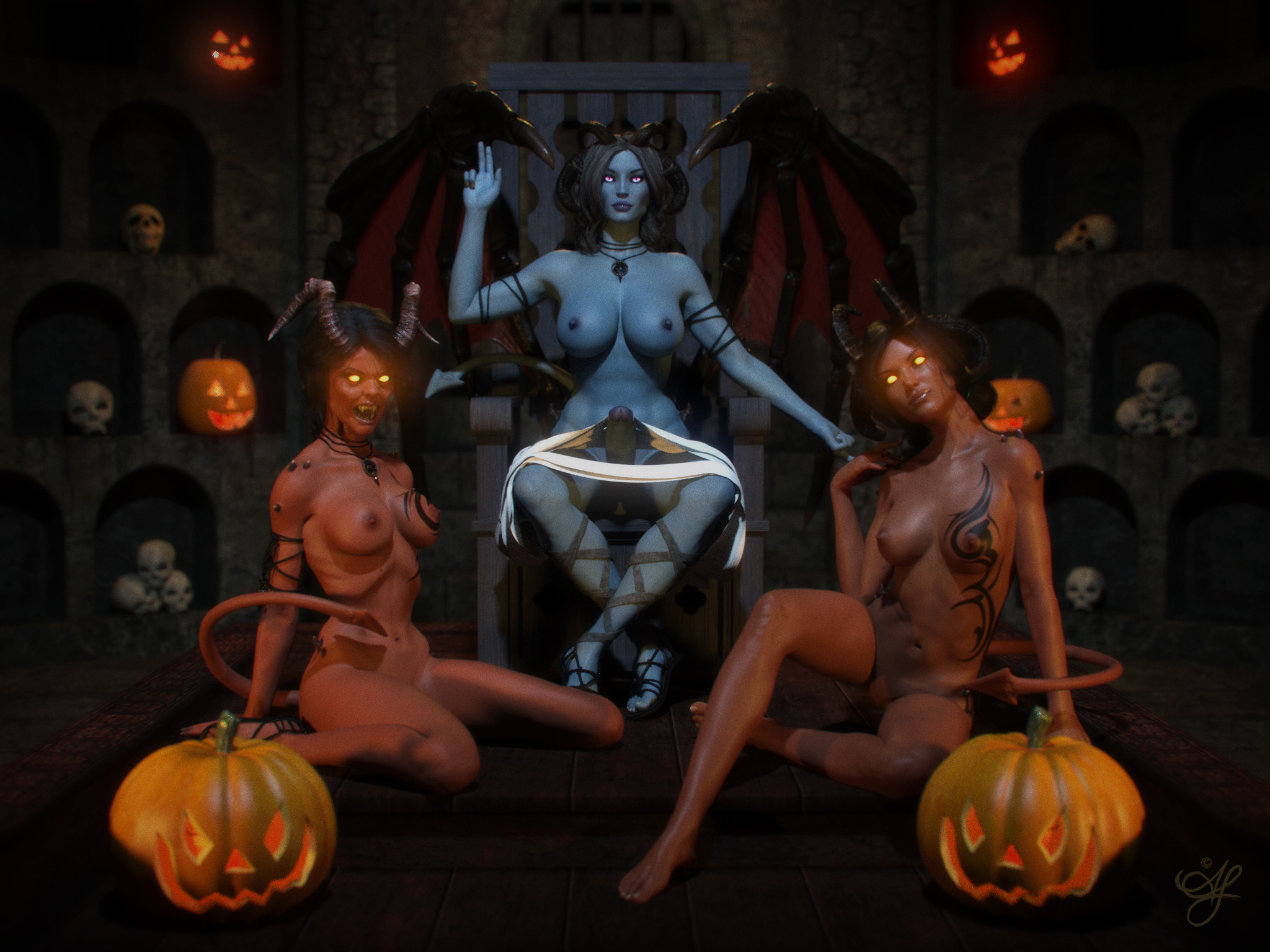 Do you have any advice for artists and writers; generally, and specific to 3DX?

Do it. Take Nike's advice and "Just Do It." You only get better with practice. I used to think it was a talent. It is to some degree, but even talent can be sharpened with practice. And read, read a lot. I was never a good reader when I was young. I've been making up for it when I got older. For 3DX, look at images with a critical eye. Why do you like some images more than others? Look at the qualities you might not pay attention to at first glance. Make a list of those qualities, lighting, camera angle, color scheme, etc. Then, when you're ready to create, take some of these qualities into account and put your own spin on it. Above all, experiment.

What themes do you want to explore in the future?

That's a good question. One I haven't even considered. I've always been a fan of horror and dark themes, demonology, occult, those sort of things. I suppose that is one I'd like to delve deeper into, though Horror does not lend itself well to 3DX I suppose. Extending the occult into sci-fi and fantasy as well would make for interesting imagery. The Sith character I recently uploaded, Nyx, kind of touches on that a bit. I seem to have a penchant for powerful, dark, female characters; what does that say about me? Mixing genres and themes can lead to very interesting and unique ideas. Battle Chasers and Firefly are a couple of examples. 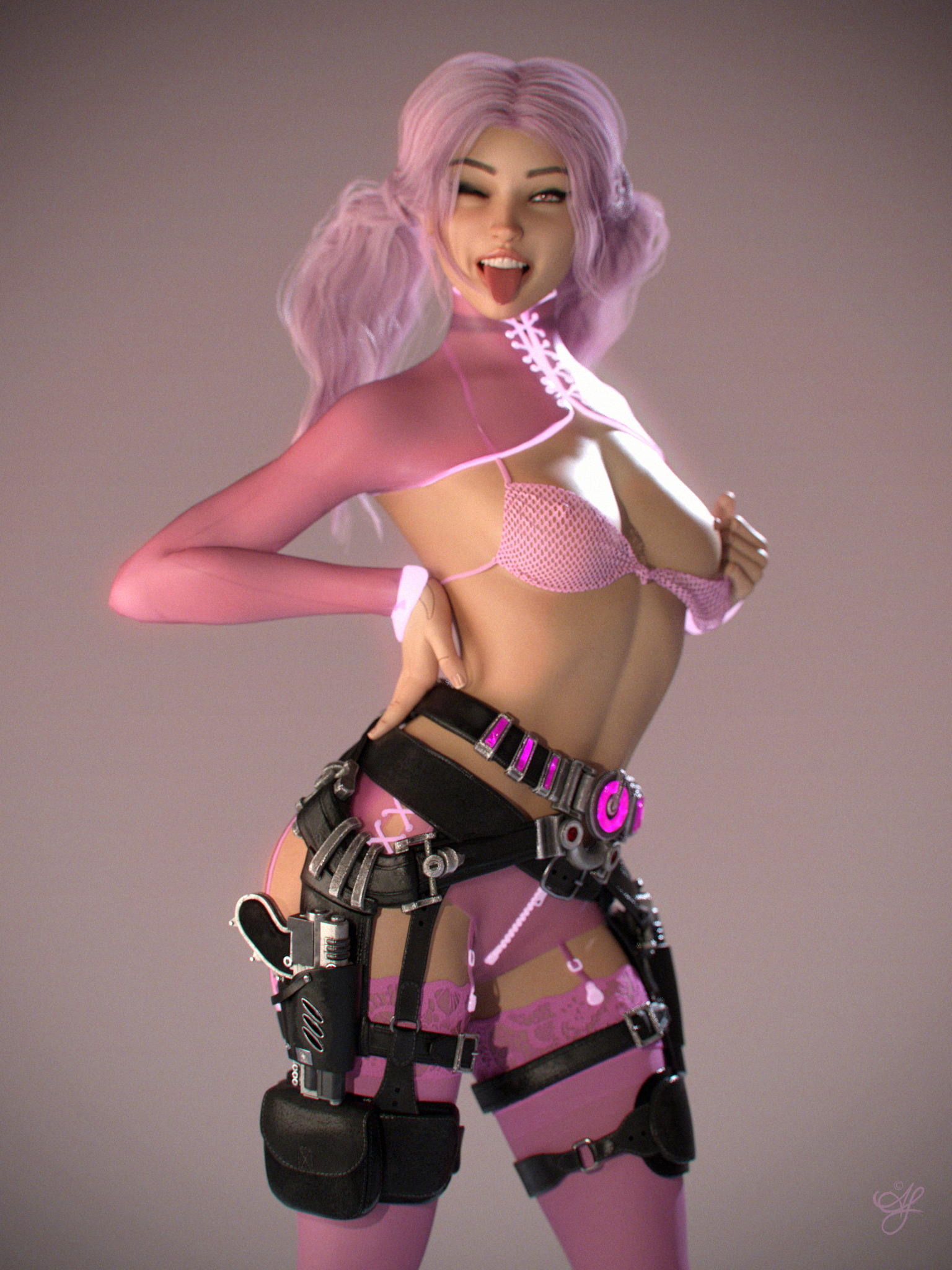 Anything else you would like to say to your fans?

Thanks for the support. That's it. I love being an artist and I'm happy I can share bits and pieces of my brain with them, and I'm glad they enjoy those pieces. I hope I can inspire others to go off in a different direction. Happiness and Joy!

Thank you for the interview AmoutEtLuxure! We look forward to seeing more from you soon. (Also, did we mention how much we loooove Xelphy? We love her! Perfect combo of cute and sexy.)  Be sure to check out AmourEtLuxure's Slushe Gallery and follow for more updates!